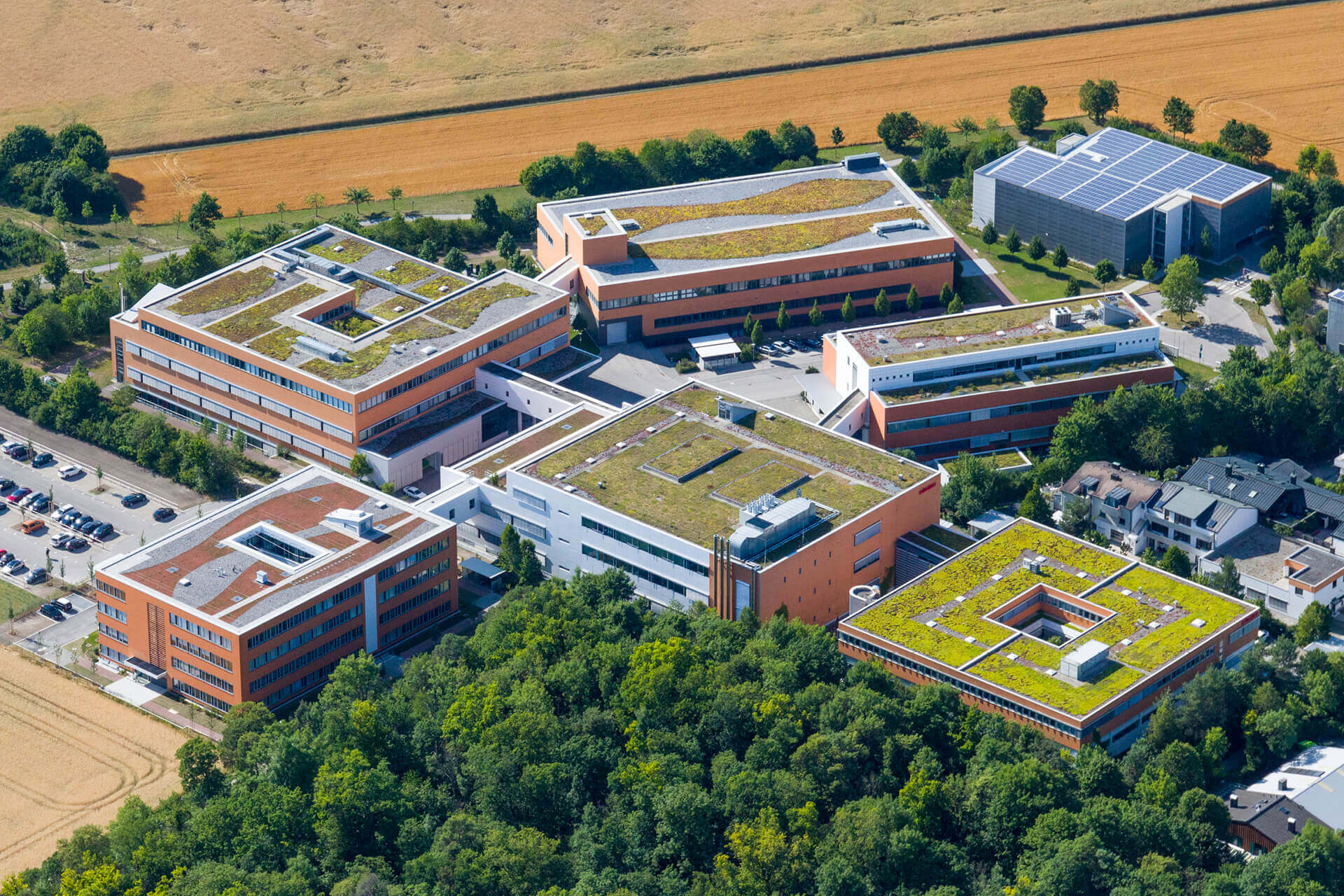 Sustainably—On the Road Toward Climate Neutrality

Sustainably—On the Road Toward Climate Neutrality

Schreiner Group aims to be climate-neutral by 2030. It is an ambitious plan that the company laid down in its strategic sustainability goal in 2021: a statement of intent that clearly surpasses the goals of other industrial companies—but that is based on solid data and clearly described roadmaps. The family-owned company already emits 70 percent less CO2 than it did a few years ago; the share of renewable energies already amounts to more than 55 percent; the German sites already purchase green electricity exclusively—but the plans go beyond all that.

“All of our roofs are green roofs, except for those on the parking garages, where we’ve installed photovoltaic systems,” says Dr. Thomas Gulden while pointing to the two buildings on the perimeter of the company’s premises. As Schreiner Group’s environmental and occupational health and safety officer, the PhD chemist’s responsibilities include achievement of the strategic sustainability goal. In 2021, the company based in Oberschleissheim decided to convert its production to climate-neutral processes starting in 2023 and to achieve full climate neutrality by 2030. The roof of Building II offers a view of the entire premises and from here Thomas Gulden points out what has been achieved so far. Schreiner Group’s headquarters encompasses six shared office buildings and production facilities, two parking garages, and several smaller buildings. The last large building was erected as recently as in 2016. “It’s a ‘Green Building’ in every respect,” explains the company’s environmental officer, “which means that the whole building emits zero CO2 emissions. Air conditioning, for instance, uses only ground water and a heat pump.”

To achieve the goal of climate neutrality, a large number of individual projects have to be tracked. Actions that at first glance may appear to be of minor significance can, as a whole, contribute to clearly lower CO2 emissions. In 2021, the company started converting the air conditioning systems to a low-energy form of humidification. Compressed air leakage was reduced, the control unit for venting systems optimized, and spreading of the air conditioning parameters implemented. These actions alone enable energy consumption to drop by two to three percent. Actions in 2022 include conversions to LED lighting in additional production areas and a further expansion of electric mobility in the company’s fleet, among other things. Nine in-house electric charging stations were installed on company premises in 2021.

A company cannot be climate-neutral and sustainable unless its products are. This poses a challenge because a large part of the labels and functional parts produced by Schreiner Group use primary raw materials—i.e., wood and petroleum—due to exacting customer requirements. Therefore, alternatives had to be found. The company has tested numerous sustainable materials—from recycled to natural basic substances—with promising results. In some cases, CO2 emissions are 50 percent lower than those related to petroleum-based plastics and material consumption is reduced as well. All sustainable products are identified by the “Integrated Sustainability” logo and are already available to customers today.

Emphasis on Recycling: Also for the Customer’s Benefit

Waste is not necessarily waste. Anything that can be recycled should be recycled, thereby minimizing waste. This also helps protect the climate because waste disposal has the side effect of causing CO2 emissions. Schreiner Group has been recycling silicone paper that is generated as waste for more than ten years. Now the treatment process makes it possible to sell part of this silicone paper as a valuable substance for direct reuse. The same applies to siliconized polyester (PET). Schreiner Group can reduce waste by a total of almost 300 metric tons in this way. This not only benefits the environment but also its customers because for a number of years the high-tech company has been offering to assist them free of charge in recycling the liner materials generated at their sites.

“Today, we focus on climate neutrality and sustainability more than ever before and in 2022, we’re going to qualify additional sustainable products,” says Thomas Gulden. “We’ve already received feedback from customers and partners that has been positive across the board. That’s tremendous motivation.” Schreiner Group’s environmental officer has returned to his desk but will have to leave soon. His commuter train runs every twenty minutes. In his personal life, he doesn’t just pay lip service to sustainability either. It’s been years since he’s owned a car.

Sustainability Ratings
Sustainability plays an increasingly important role for businesses. Numerous service providers perform neutral assessments of how sustainably companies operate and reflect their findings in relevant rankings. Schreiner Group has been subjecting itself to such assessments for many years and numerous customers and partners can subsequently access this data. All sustainability portals have awarded Schreiner Group with extremely good ratings. The market leader, EcoVadis, for instance, ranks the company in the top two percent of the printing industry. With other service providers, such as Ecodesk, Integrity Next, and NQC, Schreiner Group’s sustainability rating ranges between 87 and 95 percent—whereas some other companies achieve only 70 percent.